The Story of Fionn Mac Cumhaill

Said to be from around Ballyfin in County Laois, Fionn Mac Cumhaill was a leader of the Fianna during the Fenian cycle of Irish Mythology. He was the son of Cumhall, a former leader of the Fianna and Muireann Muncháem the daughter of druid, Tadg Mac Nuadat. Before Fionn was born, Tadg had foreseen the marriage of Muireann and Cumhall and that he would lose his ancestral seat, leading to him opposing the relationship, however Cumhall kidnapped Muireann so they could be together without her father.Infuriated with what had happened to his daughter Tadg appealed to the then High King of Ireland, Conn of the Hundred Battles. As a result, Conn outlawed Cumhall and set out in pursuit of the pair, catching up with them at the Battle of Cnucha where Cumhall fought Conn but was killed by Goll Mac Morna who subsequently became the leader of the Fianna. At this point Tadg ordered his men to burn Muireann but Conn stepped in to stop this, instead sending Muireann and her unborn son to live with Cumhall’s sister Bodhmall, a druidess and her husband Fiacal Mac Conchinn in the Slieve Bloom Mountains.Muireann gave birth to a boy who she called Demne but later changed that name to Fionn in order to protect him. She left him in the care of Bodhmall and the warrior Liath Luachra, both women thought him all they could including how to fight and hunt. When he was a little older, Fionn joined the services of several local kings until they would realise who he was and then release him of his duty fearing that they would not be able to protect him from his enemies. While he was still young, Fionn met Finn Eces, a druid and poet who had spent years trying to catch the Salmon of Knowledge, a fish that lived in a pool on the River Boyne. The druid was desperate to catch the fish said to give all of the knowledge in the world to the one who ate it. Eventually he did land his catch and gave it to Fionn with orders to cook it for him, Fionn did this but burned his finger on the skin of the cooking fish. As a natural reaction Fionn put his finger to his mouth and inadvertently gained the knowledge the druid craved, having seen this happen Finn Eces gave the rest of the fish to Fionn to finish eating and in so doing Fionn gained the knowledge needed to plan his revenge on Goll for his father’s death.

Every 23 years Aillen, an incendiary being of the Sidhe, lulled the guards of Tara into a sleep and would then burn the place to the ground while the Fianna, led by Goll Mac Morne, were helpless to stop it happening. When the cycle was about to begin again Fionn Mac Cumhaill arrived at Tara and laid in wait for Aillen, he had a spear that was magically enchanted to stay red – hot, he kept this pressed to his forehead using the pain to keep himself awake. When Aillen arrived, they fought with Fionn emerging victorious and as a result made the new leader of the Fianna with Goll willingly stepping aside. Some stories say Goll was a loyal and close follower of Fionn after this but others say the two struggled to get on. Fionn demanded compensation from Tadg for his Father’s death, threatening him with war if he refused, the compensation came in the form of Tadg offering his home, The Hill of Allen, to Fionn which he accepts.While out on a hunting trip with his two hounds, Bran Sceólang, Fionn spotted a deer. His dogs, who were born of a human, enchanted into the form of a hound and recognized the deer as having been human. Her name was Sadbh and she had been changing into the form of a deer by Fear Doirich, a druid that who she refused to marry. Fionn took her home and as soon as she touched Fionn’s land she transformed back to her human for as his land was the only place she could do this. They were married and soon Sadbh was pregnant but one day while Fionn was away fighting Fear Doirich returned and transformed Sadbh back into a deer. When she disappeared Fionn spent years looking for her but to no avail, however on one of his hunting trips his dogs spotted a fawn who they knew to be his son Óisin, after transforming into a child he would grow up to be one of the greatest of the Fianna.Later in his life, Fionn was promised Gráinne, daughter of High King Cormac Mac Airt but she refused to marry Fionn, instead she ran away with Diarmuid Ua Duibhne. Fionn gave chase and pursued the couple, who were helped by the Fianna and Diarmuid’s foster – father Aengus, God of love and youth. The pair avoided capture and eventually Fionn made peace with them. Some years later Fionn invited Diarmuid on a hunting trip but a boar injures Diarmuid after goring him. Fionn had the power to heal people who drank from his hands and went to get water from a nearby stream but every time he started the return journey, he would let the water in his cupped hands drain through his fingers. Diarmuid’s son Oscar shamed Fionn because of his actions and he takes water back in his hands but by the time he arrives Diarmuid has died from his wounds. There is some mystery around Fionn Mac Cumhaill’s death but one of the most popular beliefs is that he still lives in a cave, possibly under Dublin with the Fianna around him waiting to rise and defend Ireland when he’s most needed. Fionn Mac Cumhaill is credited with many geographical features in Ireland, Scotland and the Isle of Man. According to Irish folklore, he created the Giant’s Causeway to cross from Ireland to Scotland without getting his feet wet. While in the process of doing this, he was told that Benandonner was on his way to fight, hearing this, Fionn enlists the help of his then wife Oona who dressed him up as a baby. When Benandonner arrives, Oona tells him to put his finger in the “baby’s” mouth to feel how sharp his teeth are. He does this, Fionn bites down hurting his rival’s hand and having felt the sharpness of the teeth and seeing the size of the baby, Benandonner didn’t want to face the child’s prospective father and fled back to Scotland, smashing the causeway as he went.The Isle of Man and Rockall origins are also attributed to Fionn Mac Cumhaill when he ripped up a piece of land to hurl at a rival but missed and where it landed in the sea created The Isle of Man while a pebble flew off North – West and created Rockall. The void left behind became Lough Neagh. 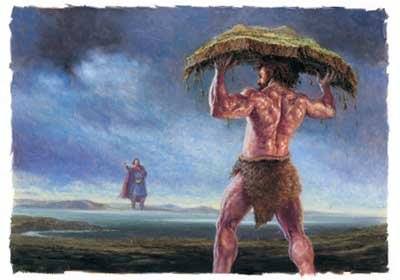