Heritage House now has a range of heritage prints available to purchase. These photos have been captured locally over various time periods. Heritage House has chosen some of the most and interesting photos that show some of the major changes of life in Abbeyleix over the years. Each photo has been individually restored and sized at Heritage House.

We can cater to various photo sizes, with or without frames and mounts. Please get in touch and let us know what you are looking for. We would be more than happy to help!

Scroll to see our range of photo options! 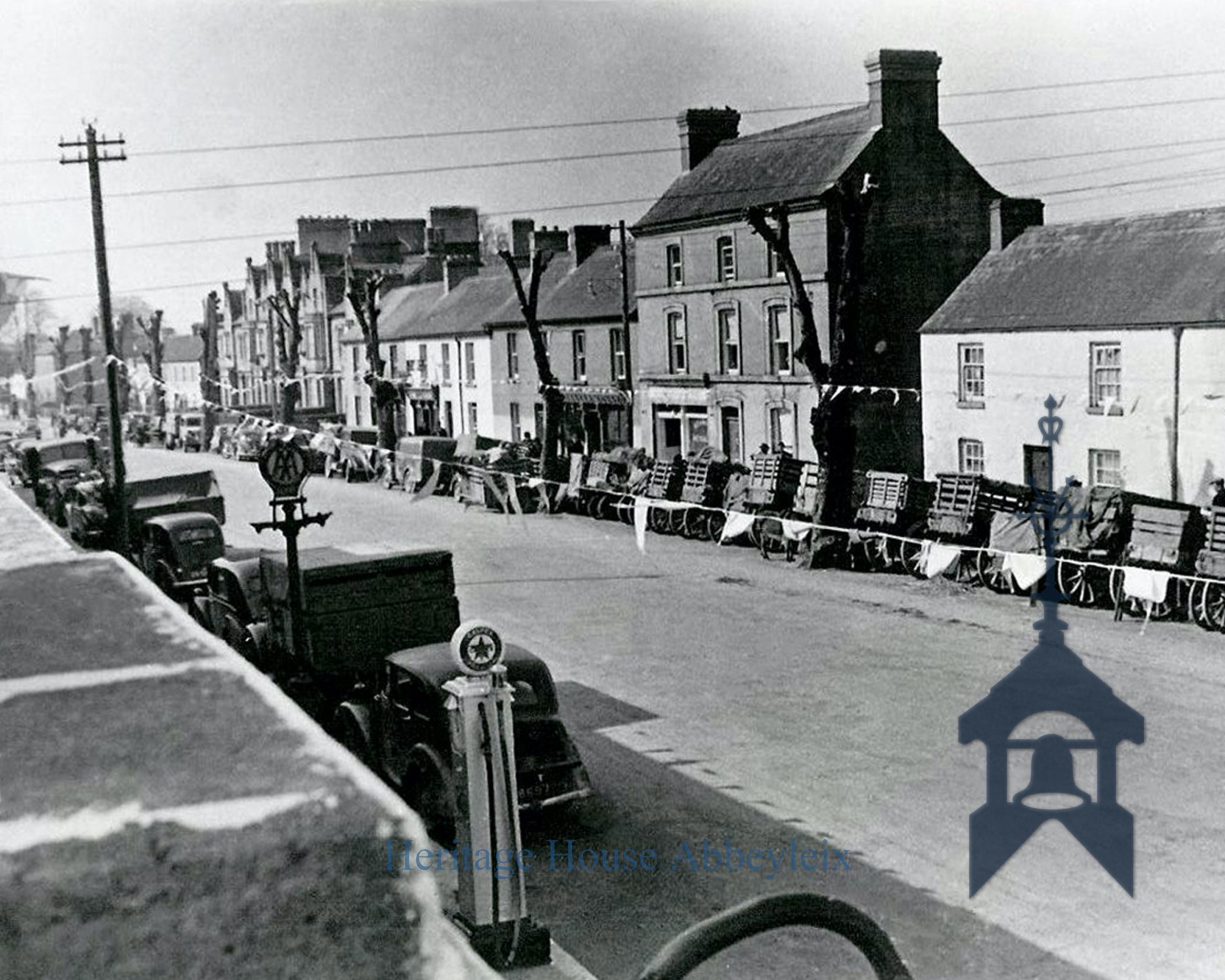 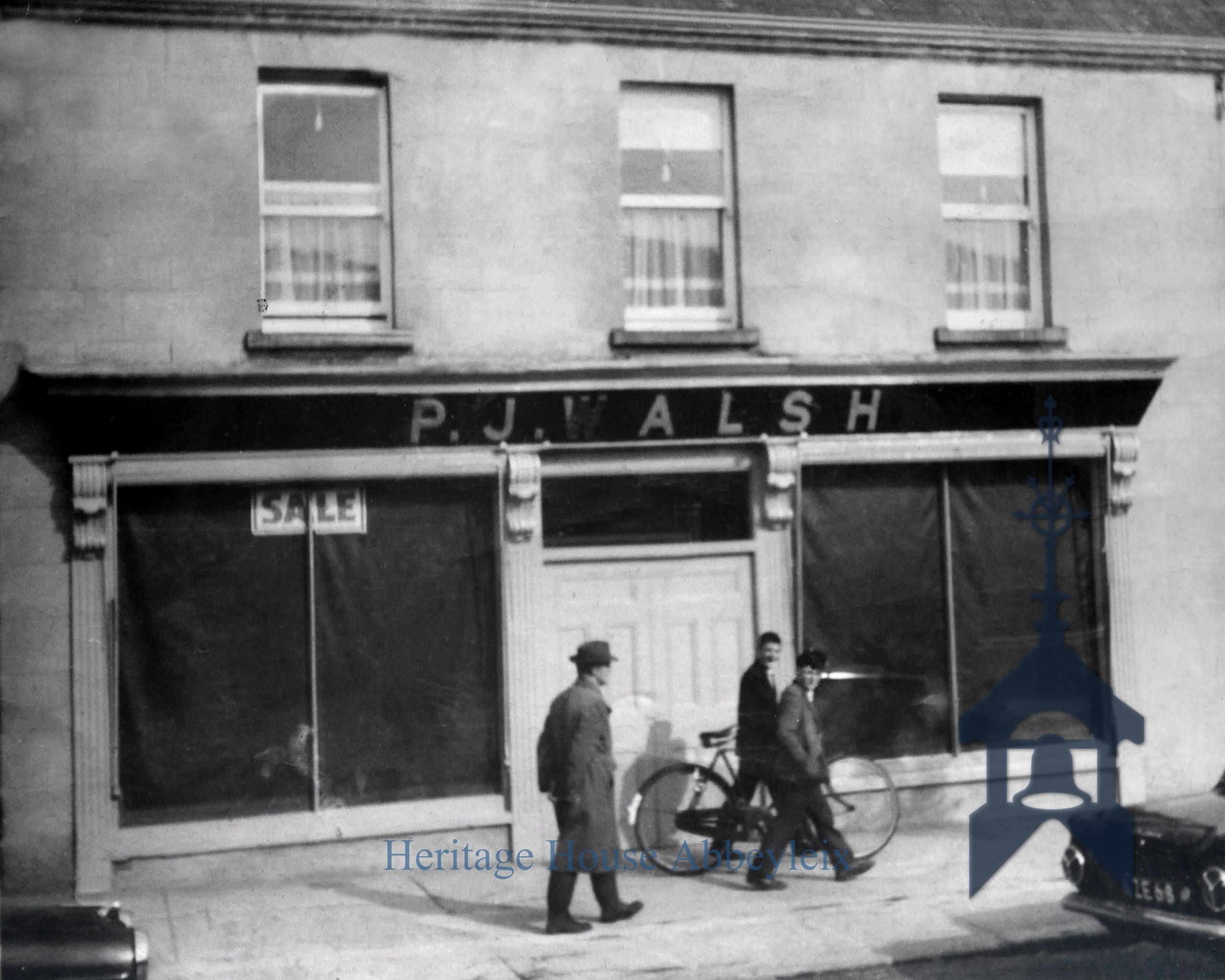 P J Walsh’s was another drapery. The building is now home to People First Credit Union on the main street of Abbeyleix.
Date unknown 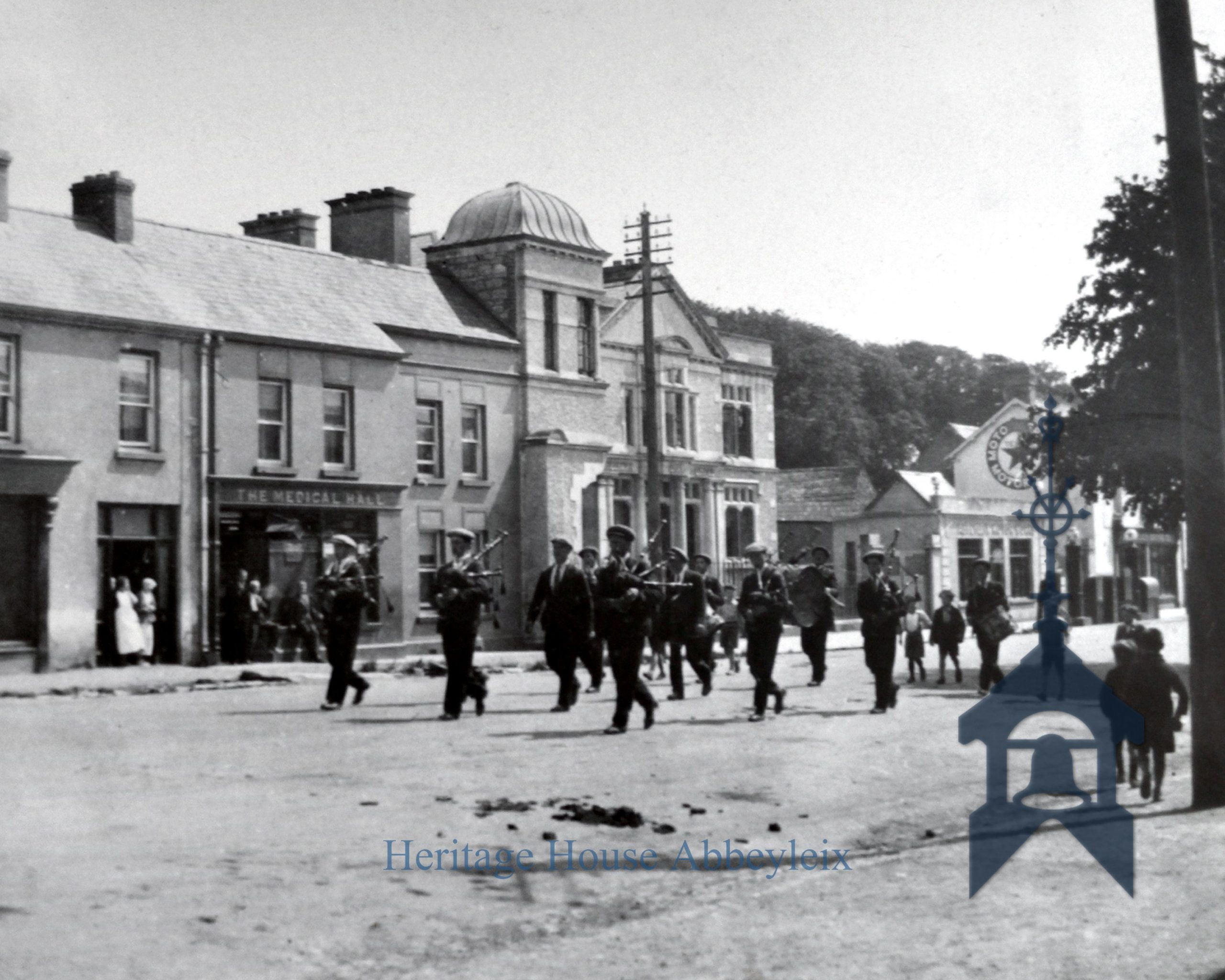 This image from 1939 shows the Blandsford band marching down town to meet the Ballyroan and Cullenagh bands in town on their way to a meeting in Rathdowney. In the background of this image you can see The Medical Hall- now O'Donnell's Pharmacy, Bramleys Motor Works now the Gallic Kitchen at Bramley and the Bank of Ireland building which at this time was the Hibernian Bank among others. 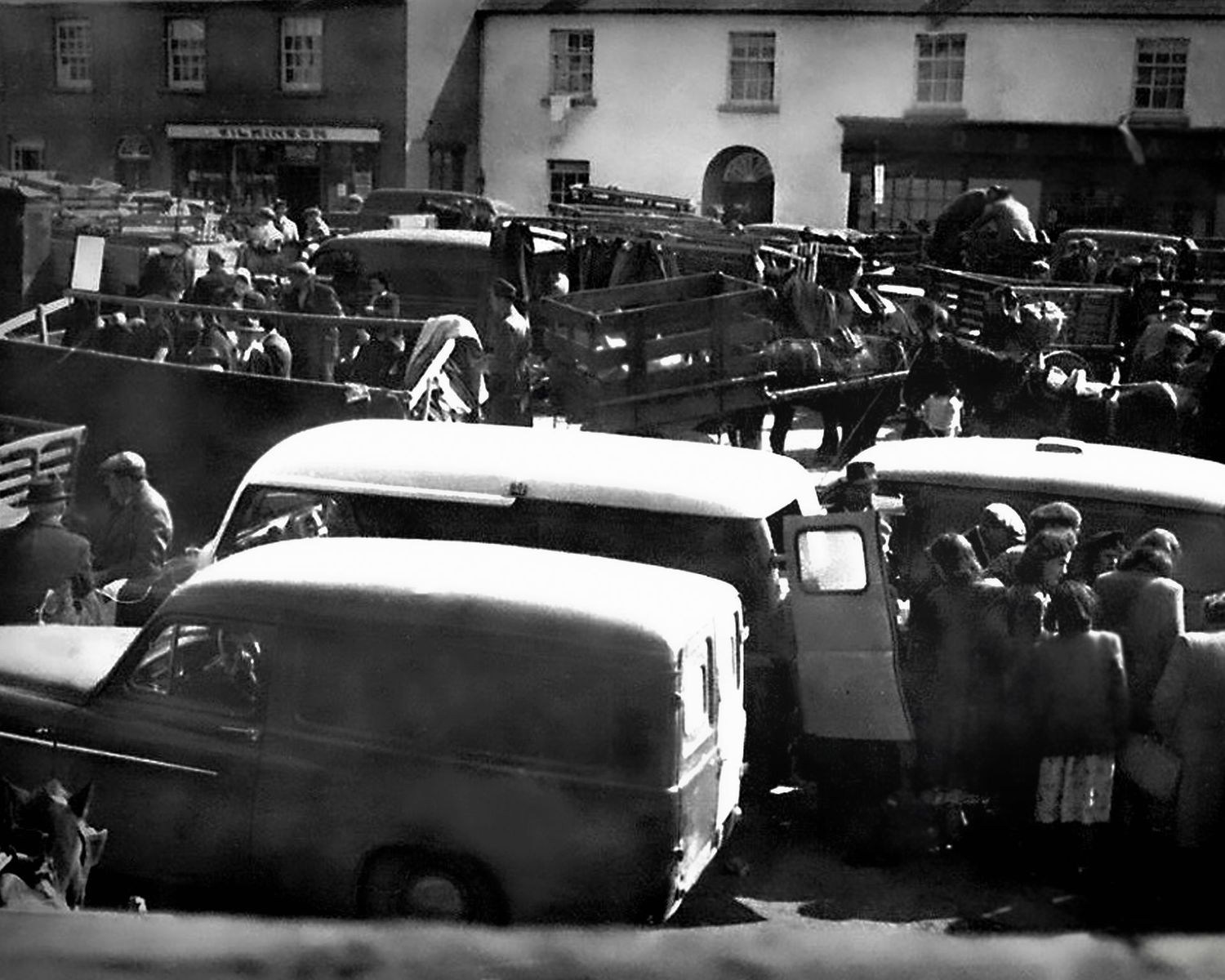 This is what a busy market day would have looked like. Behind all the hustle and bustle Wilkinsons shop pictured went on to house Moynan’s Toy Shop and is now home to St. Vincents charity shop. To its right Delaneys store has become Capri Grill and Ladbrokes bookies today. 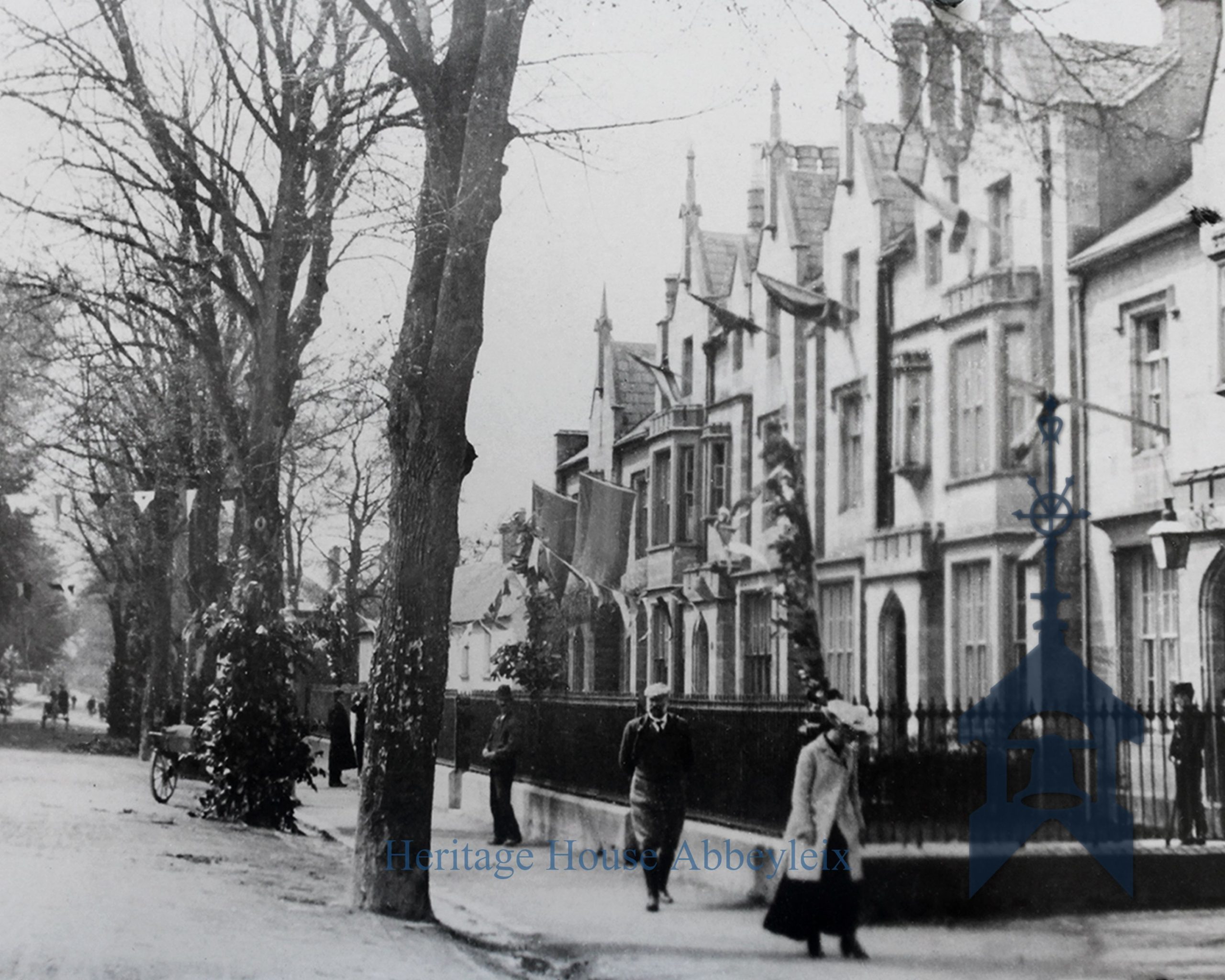 Pembroke Terrace was built in the 1830s as part of a wedding gift to Lady Emma De Vesci from her father Lord Pembroke upon her marriage to Lord Thomas Vesey, 3rd Viscount de Vesci. During the early 1900s the four terrace buildings were home to the post office, the Royal Irish Constabulary station, the RIC sergeants home and the Hibernian Bank. This building eventually became the Hibernian hotel and today is a direct
provision centre. The other three buildings have passed into private hands over the years. The post office was moved to a building opposite the square in 1910, the bank moved to the Bank of Ireland building on main street in 1906 and the police station moved to the Ballinakil road in the mid 19th century. 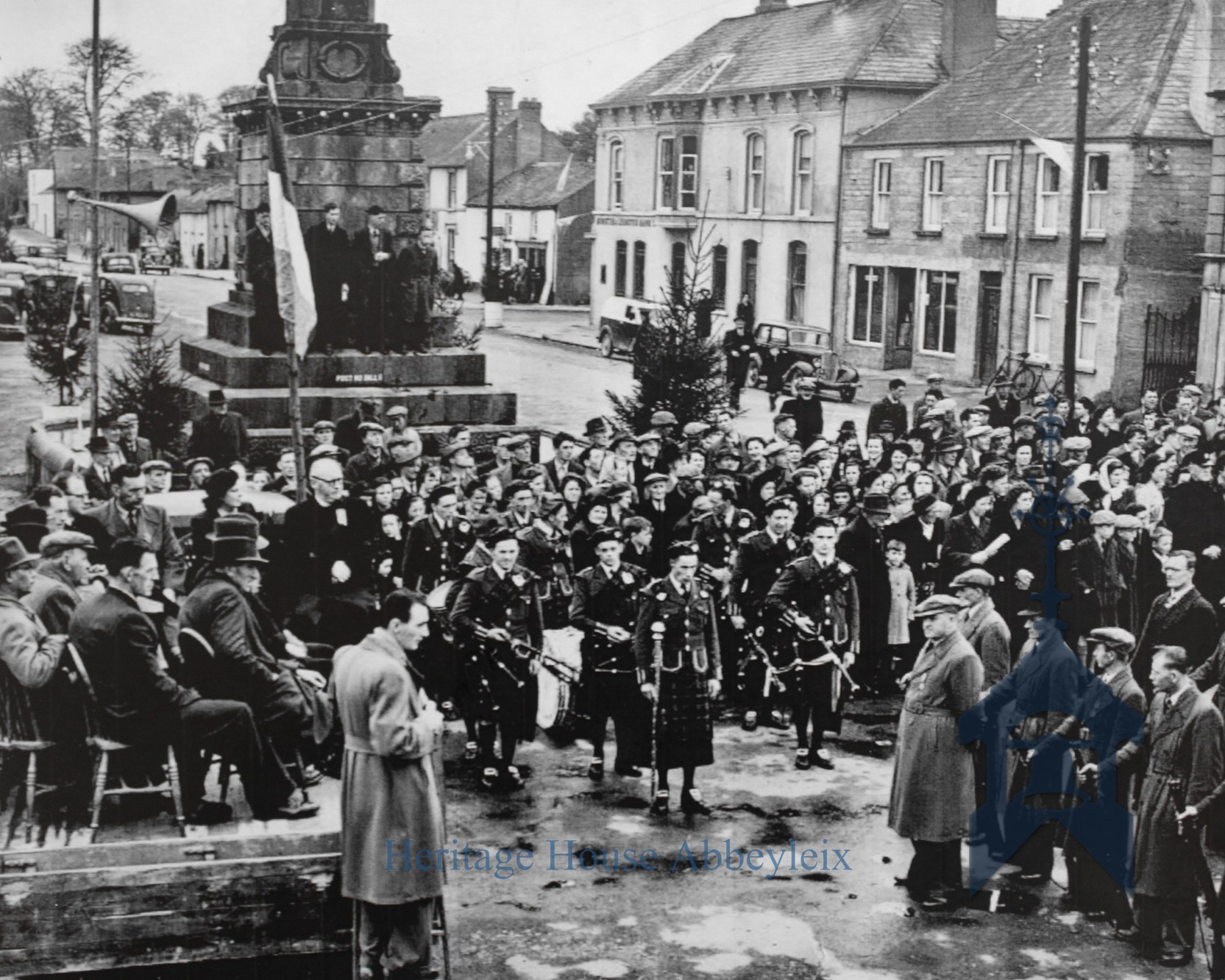 The monument in market square was erected by public subscription of the people of Abbeyleix in 1860 in memory of the 2nd Viscount De Vesci in thanks for the assistance given by the De Vesci family to the people of Abbeyleix during the Famine when rents were reduced and food distribution
organised. It is still a main focal point of the town today.
Date unknown 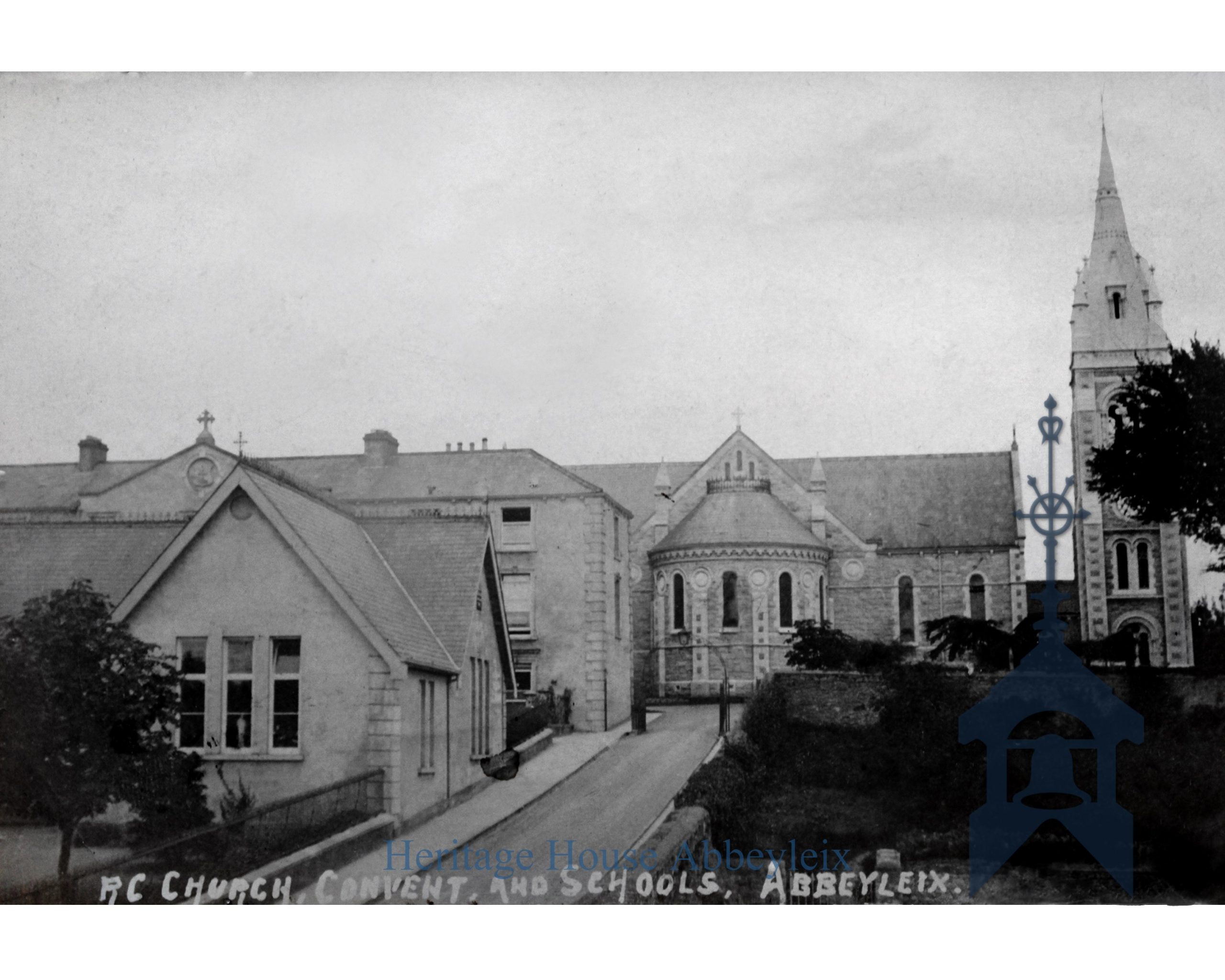 The Brigidine Convent School and the Church of the most holy Rosary. c1960s.

The Brigidine nuns came to Abbeyleix in 1842 at the request of the Parish priest and a convent was built adjoining the Church of the Most Holy Rosary. It was extended in 1851 and 1863 when the “Nun’s chapel” was added. 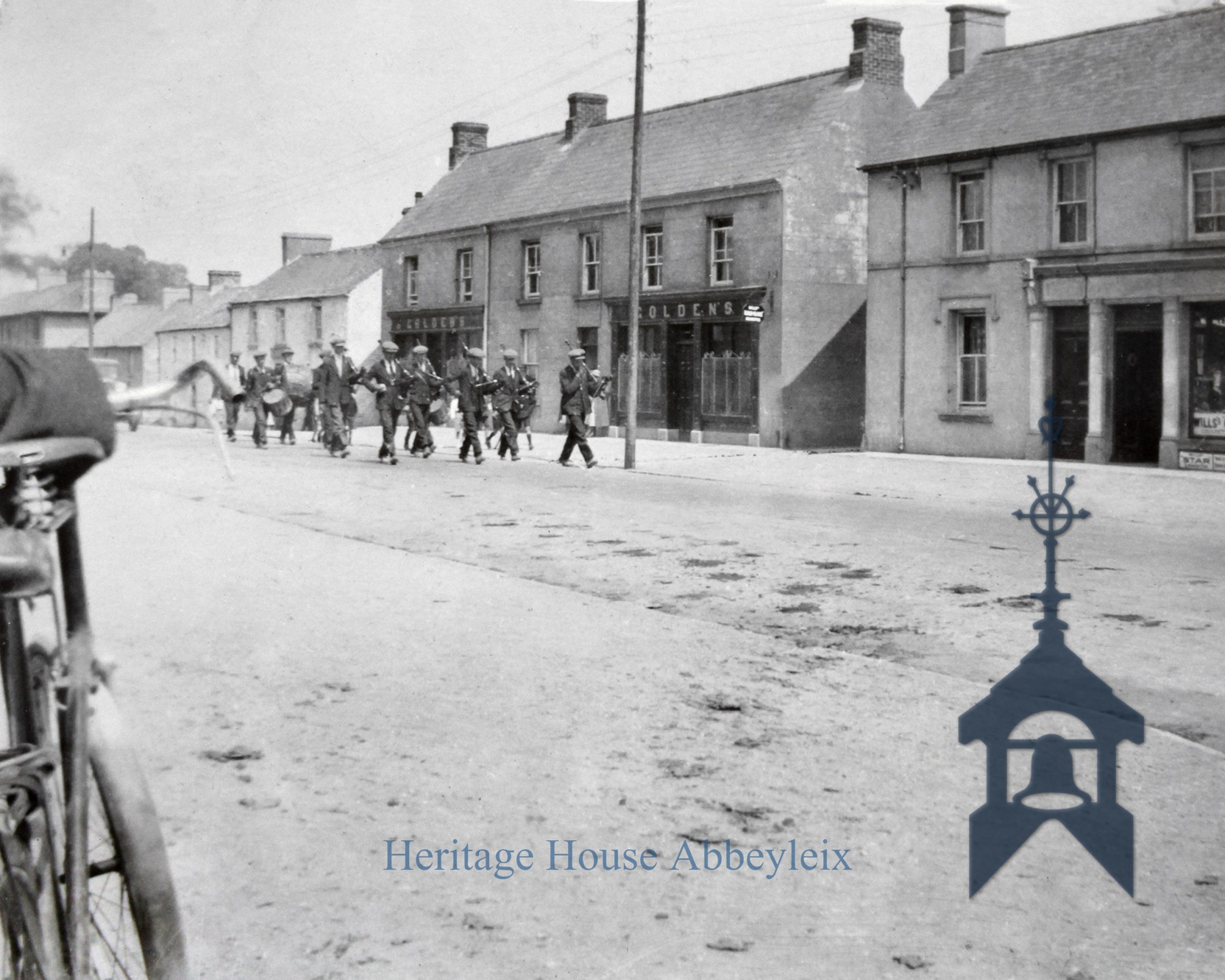 This image from 1939 shows the Ballyroan band marching town main street to meet bands from Blandsford and Cullenag in the town centre on their way to a meeting in Rathdowney. In the background of the photo you can see Goldens' store front-now Williams' Butchers and next door the building now houses Sue Ryder charity shop.

Pictured standing in front of Abbeyleix Motor Works is Frank Bramley, (proprietor) and Mick Dollard a mechanic. This site was the original location of the world famous Abbeyleix Carpet factory which in its day produced carpets for Harrods in London, the ill fated Titanic and those used in the coronation of King George V of England among others. It was amalgamated with the Kildare Carpet Company in late 1912 and the two small wooden cabins which housed the factory were demolished. The Motor Works was built by the Bramley family a short time later. The Motor Works operated successfully for many years until its closure at the end of the twentieth century. The building pictured was then demolished and the Weaver Court Apartments built on its site. 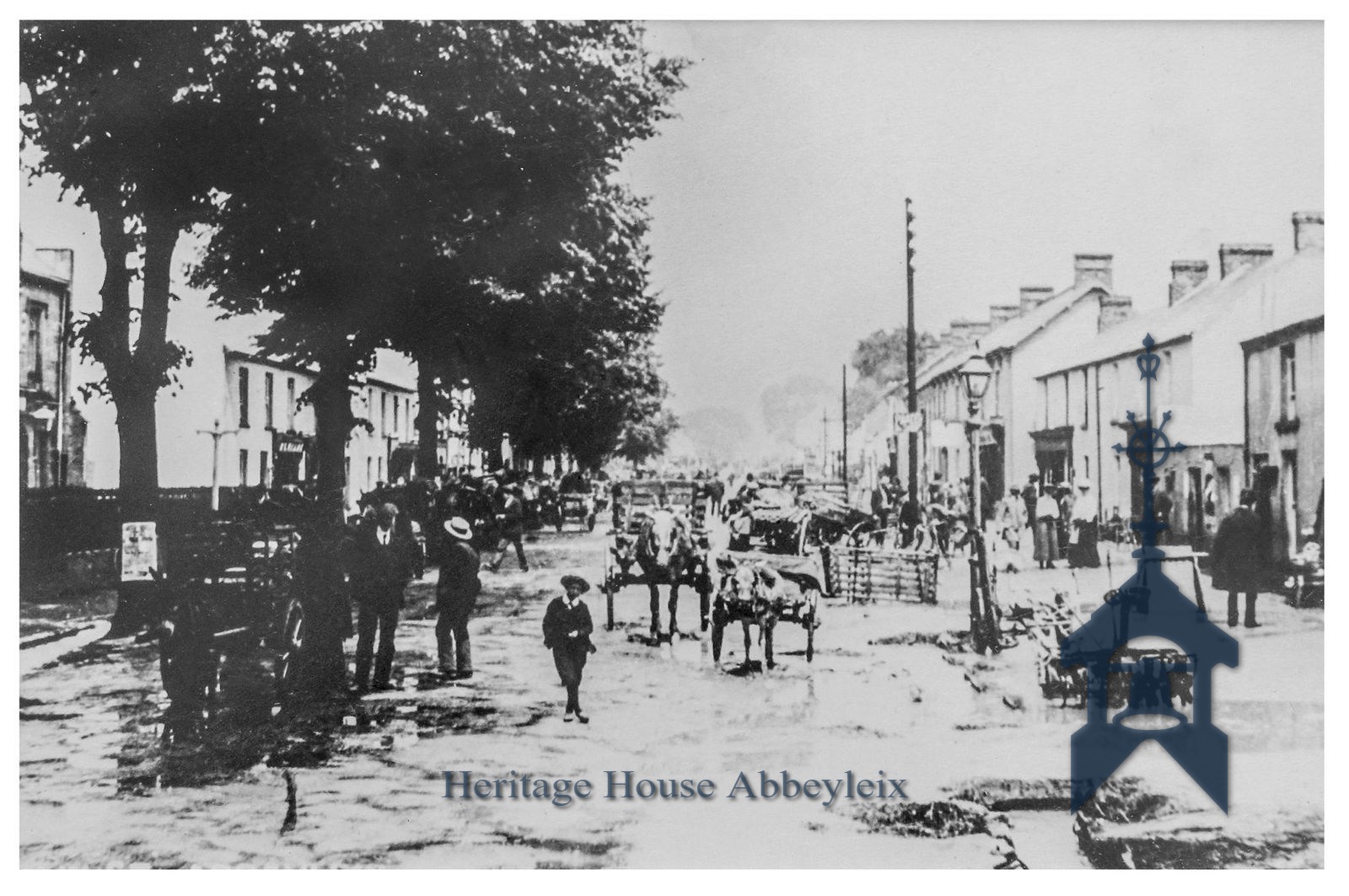 Turn of the century 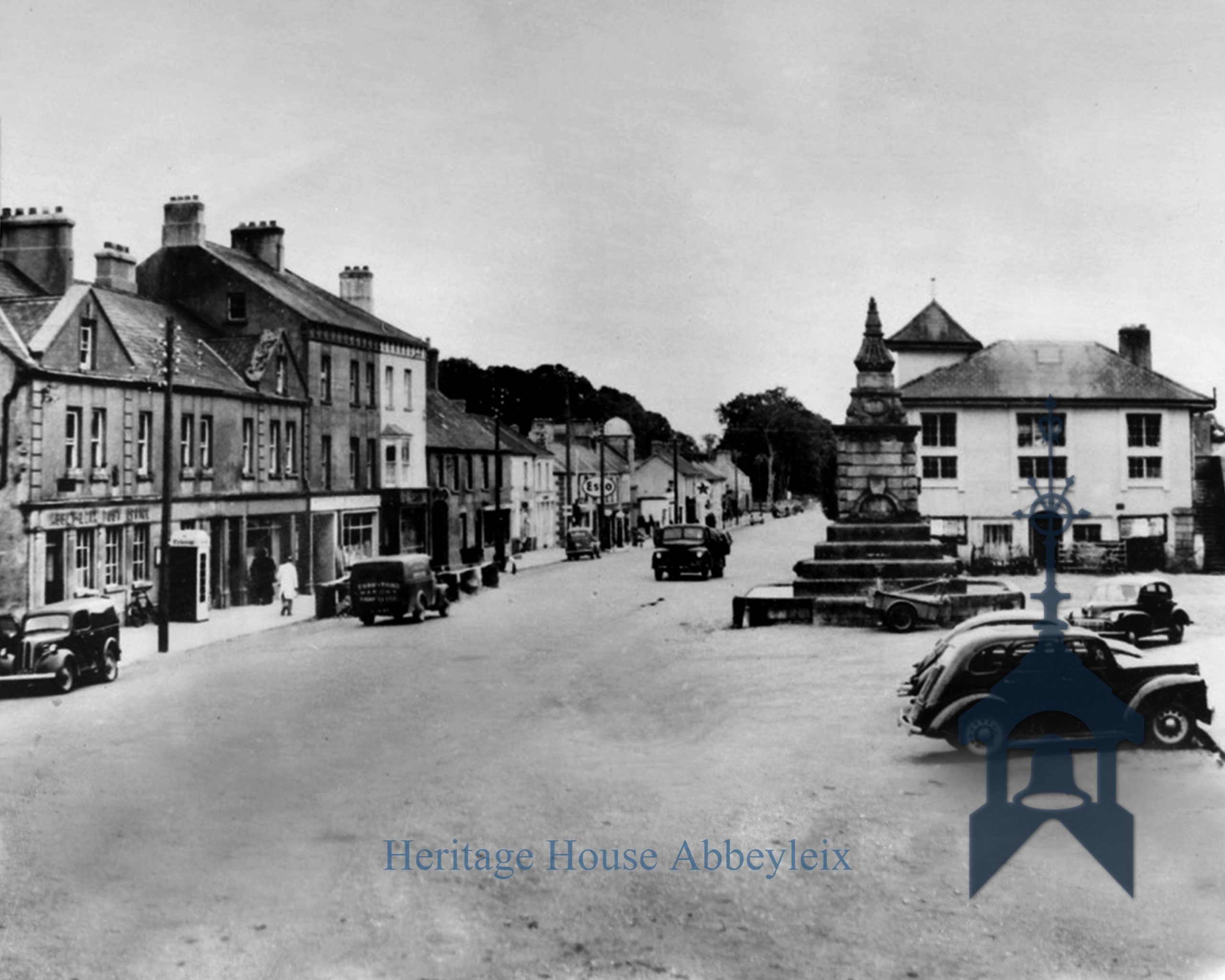 The market house built in 1836 by Viscount De Vesci was built to facilitate the large number of fair days and markets which occurred in the town at that time. There was a market each Saturday, a revived tradition and 6 livestock fairs per year. Vendors would have stalls or “ standings “ from
which farm produce and clothes would be sold. The original market house was a two story building initially had two single story wings on either side - used as butcher stall on market days. These buildings no longer exist. It was erected on a small mound known locally as “Furry Hill” owing to the large number of rabbits living on it. The lower floor was used as the towns fire station for a number of years with the top floor acting as the
local library. The fire station was eventually moved to the portlaoise road and the entire market house renovated as a modern library and gallery.

This photograph shows a view looking up and across Main Street in Abbeyleix towards the Market House in the Square during one of its many fairs. The market house was built in 1836 by Viscount De Vesci to facilitate the large number of fair days and markets which occurred in the town at that time. There was a market each Saturday, and 6 livestock fairs per year. Vendors would have stalls or “ standings “ from which farm produce and clothes would be sold.
The original market house was a two story building which initially had two single story wings on either side - used as a butcher stall on market days. These buildings no longer exist.

In its earliest inception this building was used as a coach office and staging post for the Bianconi stage coaches of the18th &amp; 19th centuries. At this time Abbeyleix was a natural resting place on the main road between Dublin and Cork. Travellers could spend a night in the hotel and stop for a change of horses in the town. Rumoured visitors to the coach house include Daniel O Connell and British Prime Minister William Gladstone. In its hay day blacksmiths, stable hands and hotel domestic staff all found employment there. With the coming of the railway to Abbeyleix in the 1860s the coach house began to decline.
The hotel was eventually purchased by the Morrissey family who owned a pub and grocery store further down Main Street. They operated a hotel and drapery store from the building from the late 1800s into the early twentieth century.
Over the years the building changed hands a number of times, becoming the Folkhouse Hotel, the Abbeygate and a served a number of purposes. Sadly today the building is vacant.

This drapery shop like, the many draperies in Abbeyleix, thrived at the end of the 19th and start of the 20th until increased rail works drew business away from smaller towns. As rail works granted accessibility to more modern clothing stores in bigger towns became prevalent the reliance on the small local drapery waned. This store eventually closed became the site of the Munster and Leinster bank early in the 1920s after the foundation of the Irish Free State. In 1966 it became and Allied Irish Bank premises. In 2017 the site was taken on by Meuller O'Connell Bakery. 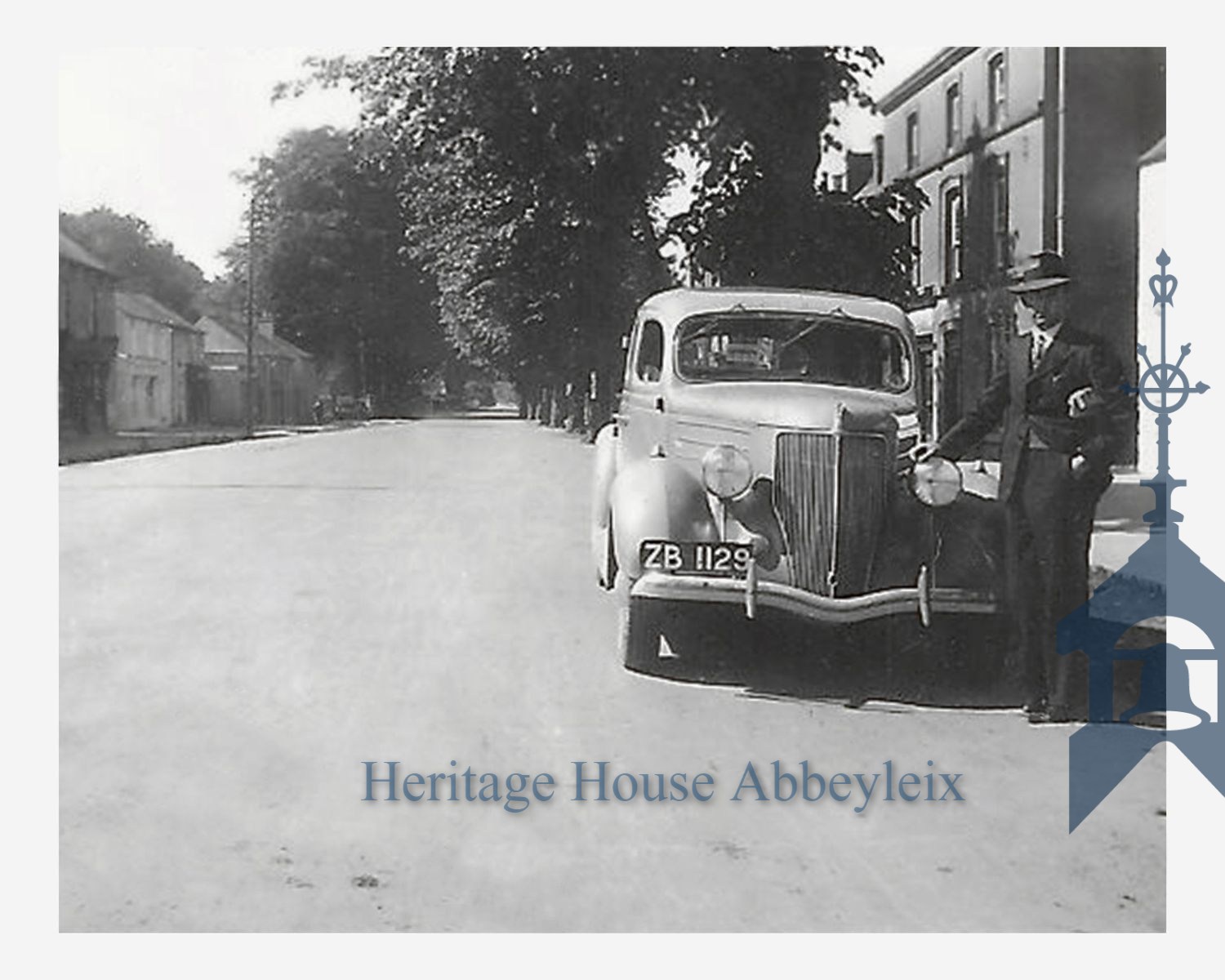 Paddy Mulhall was a nephew of the Morrissey family that owned and operated Morrisseys bar and grocery on Abbeyleix’s main street since the foundation of the town. He came to work there as a bottle washer in 1934 and eventually went on to own Morrisseys and a number of other businesses in the town. He would park this car down the street out of view of his Uncles as the was afraid they may reduce his wage if they knew he could afford a car!
Notice the view of a very wide lower main street and the giant lime trees lining the street for which Abbeyleix was known.

Fyffes have been serving the people of Abbeyleix for well over 100 years. The shop continues to sell clothing, fabric and footwear to this day and remains in the hands of the same family. While many aspects of the shop have changed Fyffes has become a consistent institution in Abbeyleix over the last century.