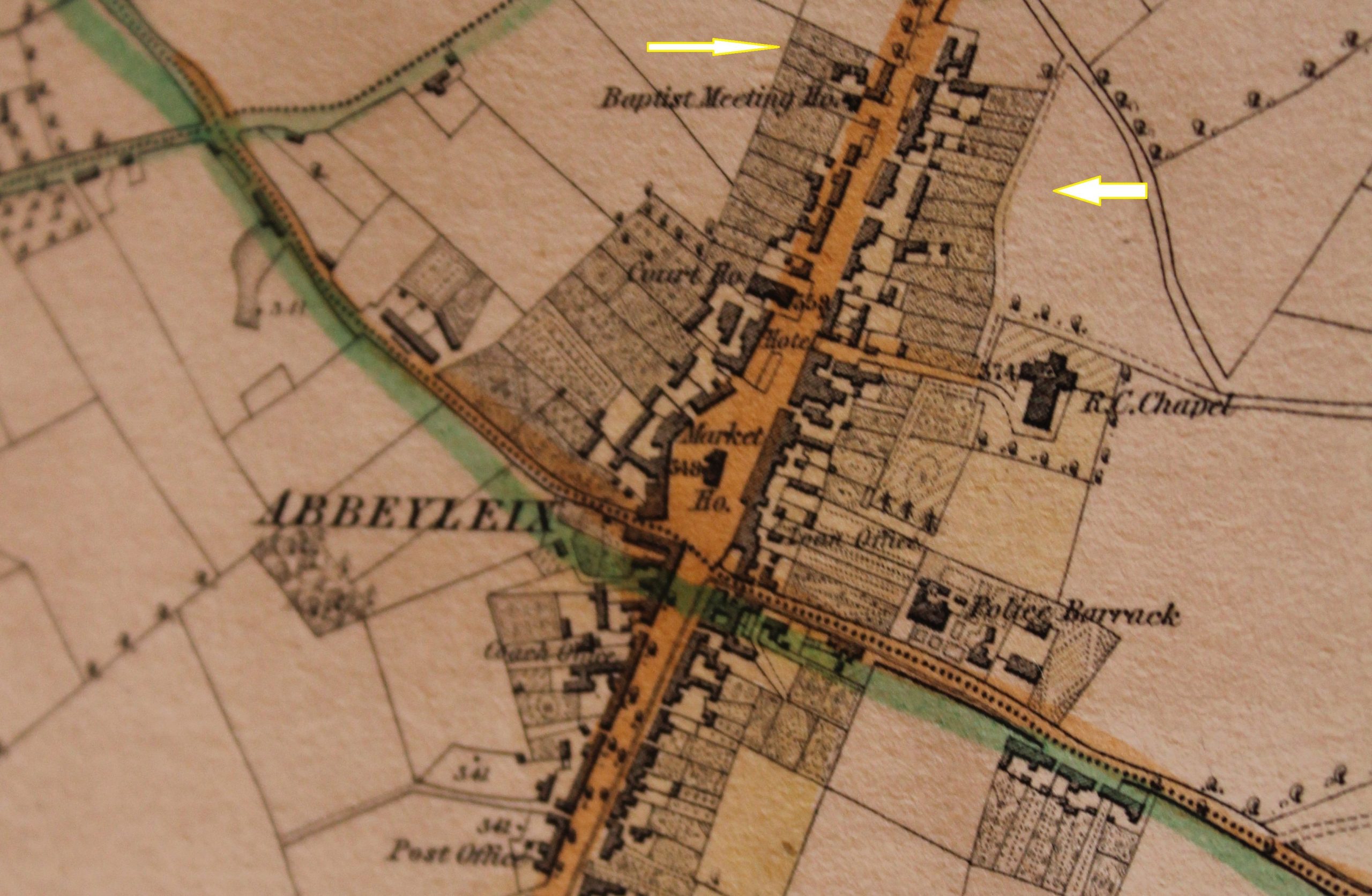 How Abbeyleix looked in 1840

What the Maps Can Tell us?

At Heritage House we have a collection of Original First Edition Ordinance Survey Maps from 1839/41, which show us the entire county of Laois at a scale of 6 inches to one mile.

The Ordinance Survey was established in 1824, under the direction of Colonel Thomas Colby, assisted by Lieutenant Thomas Larcom, to undertake a townland survey of Ireland and to map the entire country. They were based at the Phoenix Park in Dublin and the original staff was composed of Royal Engineers from the British Army. They were assisted by George Petrie, who headed the Survey’s Topographical Department which employed scholars such as John O’Donovan and Eugene O’Curry who recorded local placenames and places of historic importance throughout Ireland. The detail recorded in these maps make them a unique cartographic reference, with a high degree of accuracy. The six inch to one mile scale was so successful in Ireland it was adopted in Britain by 1840.

These maps show us a landscape which was populated by 8 million Irish people, being commissioned and completed before the famine period. Analysis of these maps show us how for instance the buildings, places, field systems, roads, industry and indeed archaeology has changed over time to the present day.

Looking at the Abbeyleix area we can see certain building and features which are not found here today or have been modified into other structures.

One thing for me which jumps out are the town houses/cottages with their gardens adjoining at the back. Designed to give the inhabitants in the town a certain degree of self-sufficiency in terms of an area to grow some vegetables and perhaps raise some pigs and chickens. Today modern town housing developments leave little room for such extensions and at best you might get a garden for ornamental proposes. Certainly forward thinking Abbeyleix planning back in those days…

A number of the buildings of the town have taken on new roles these days. For example we have the Market House as recorded on the O.S 1839/41 which is now used as a fantastic library. The Market House was built only a few years before the map was commissioned. The Post Office in 1839 was located at the end of Pembroke Terrace, now moved up to its current location near the fountain. Abbeyleix also had a local Brewery located close to De Vesci Hill, one of approximately 300 which operated in Ireland since the early 19th Century. It seems to have been out of operation by the time the O.S maps were revised in the early 1900’s.

Other buildings we see are the Coach Office located at the back of modern day SuperValue, a dispensary near Quinn’s Coffee shop and a Police Barracks located on the Ballinakill road. Notable absences from the map include the Workhouse, Fever Hospital and Temperance Street which weren’t built until a few years later in 1842/3. The town itself was moved from its previous location at Old Town sometime in the late 1700’s. One reason behind this move it seems was to avail of the trade and traffic, all horse drawn, which travelled along the mail coach road from Cork to Dublin via the new town of Abbeyleix.

In terms of mid-19th Century industry within the towns environs we see a number of mills supplied by mill-races which utilized the River Nore and other smaller tributaries of it in the area. Notable areas in which these mills were located include the aptly named Millbrook which had a large flour mill just to the south of Old Town fed by a mill race and mill pond.

Further west we had the worsted mills at Fruitlawn, fed by a mill race off the Nore.

To the north of Old town another mill race directed from the Nore which supplied water for the flax and woollen mill at Beachview House. Together these mills are attested to in Lewis’s description of the area in 1837 when he states: “There are two woollen manufactories; a large worsted-mill and factory has been recently established near the town, which affords employment to about 200 persons in combing, weaving, and spinning yarn; and on the river Nore, which passes near the town, is a boulting-mill.”

Close to Beachview we also see the mention of the town “Pound” where stray animals would be kept in a fortified area until their owners could be located and made to pay fee to the Poundmaster or constable. Often confiscated animals would be kept here by order of the court or local assizes. If fees were forfeited, the animals were likely sold at the market square in Abbeyleix on Market Day. According to Lewis’s Topography 1837 markets days were held in Abbeyleix on a “Saturday; and fairs were held on Jan. 26th, March 17th, May 5th, July 20th, Sept. 20th, and Nov. 4th”.

Finally, I’d just like to point out some of the archaeological features on the 1839/41 O.S map in the immediate area of the town. Just west of present day Abbeyleix Golf Club we see a large bivalleted or multi ditched ringfort on the O.S map. This sadly, is no longer a feature on the landscape today. A report from 1953 tells us that the ringfort was bulldozed and that a number of human remains were discovered during this operation. Ringforts with these dimensions are considered High Status in Ireland and it is likely that such a feature represents one of the earliest settlements of distinction within the Abbeyleix area, long before any of the great houses were built which dot the landscape today. Ringforts usually date from the Iron Age into the Early Christian period and by and large went out of use with the arrival of the Anglo Normans. This particular ringfort is located in the townland of Rathmoyle, from which the very townland gets its name from Rath being Ringfort or Fort and Moyle meaning perhaps O’Maolain the Irish for Tonsured one, perhaps a priestly family or community. Interestingly there are approximately 20 smaller ringforts within a 3km radius of Abbeyleix, which testify to a dense Early Medieval settlement pattern within the Abbeyleix area. Most of these are visible on the early O.S map although quiet a few of these have since been removed due to land clearance in the subsequent years.

A cluster of moated sites are also evident from the O.S map and these represent the Anglo-Norman settlement within the area. Moated sites are rectangular fortified farmsteads from which Anglo-Norman farming families settled in the newly conquered lands. These would have formed areas which were located close to manorial lands with large castles acting as the administrative centre. They were likely contemporary with the Cistercian Monastery which was founded in the area on the site of the Abbeyleix estate and perhaps were connected in someway to this great religious centre.

These maps are a fine resource to have and are available to be seen at the Heritage Centre here in Abbeyleix.