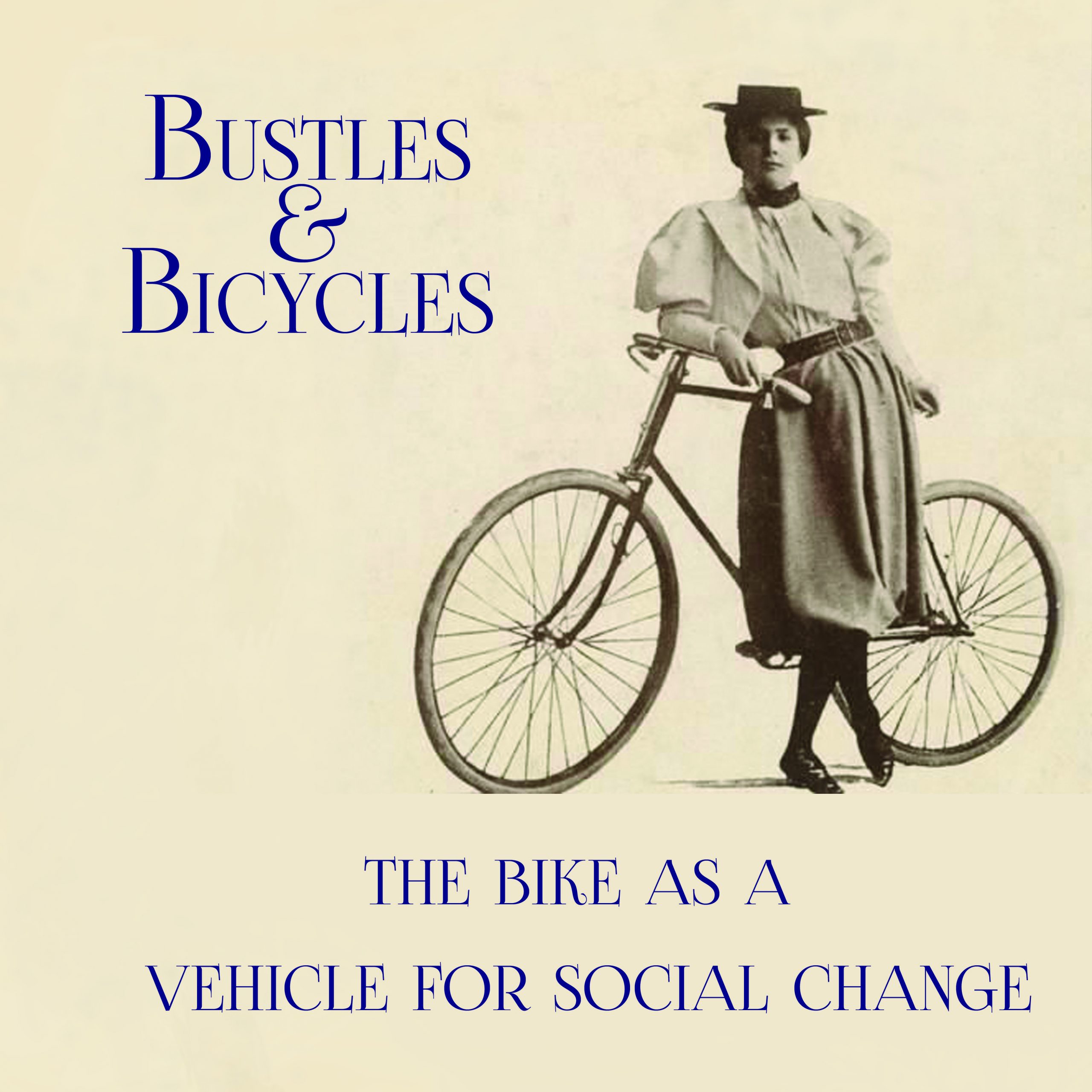 Bustles & Bicycles; The bike as a Vehicle for Social Change A fascinating theme running through the study of history seems to be the domino effect of seemingly unrelated events on one another. For example how did a volcanic eruption in 1815 lead to a change in the way women dressed in the 1900s, and how was all of this facilitated by the advent of the bicycle?  The volcanic eruption in question was that of Mount Tambora in modern day Indonesia. The following year, 1816, became known as “The Year Without a Summer”. Following the eruption, volcanic clouds of ash stretched as far as 1400 kilometres away and clouds of polluted rain as well a hazardous dry fog reached as far as the US. The effect of the eruption caused a global climate dip for the summer which led to extreme levels of crop failure. In Europe these crop failures caused mass starvation of horses and other work animals. This anomaly in nature is what inspired German man, Baron Karl Von Drais to seek out an alternative to peoples’ dependence on horses. What he came up with was to be forbearer of the modern bicycle. His invention, patented in 1818, was named the “laufsmachine”, German for ‘running machine’ and was the first mass made two wheeled, steerable, human propelled machine. It had no pedals, was made almost entirely from wood save for the iron shod wheels and weighed about 48lbs.

The invention became popular, mostly as novelty, among wealthy men of Germany and France. The concept of this machine was noticed by a cartwright in London named Denis Johnson, who went on to patent an improved version. His  version was named the “pedestrian currcicle” but was commonly referred to as the “Dandyhorse” after the wealthy fops or ‘Dandys’ who rode them. It became somewhat of a craze among English aristocracy until riders using pavements began to be fined. Many different builds and versions of human powered vehicles followed including three and four wheeled models, but most were short lived failures. The first genuinely commercially successful model was a French development of the 1860s. It used rotary cranks and pedals mounted on the front wheel hub. There were concerns over its safety and stability and it was nicknamed “the boneshaker”. The design of the bicycle was constantly amended and improved and by the 1890s it had taken the form of the “safety bicycle” which has most of the features of a modern bike. Its perfection and development into this form happened to coincide with the first wave of feminism.

The bicycle gained mass popularity in the 1890s for upperclass men as a form of entertainment and then for middle class working men as a form of transport. While for men the bike was tool of leisure or utility, for women it represented much more. It offered women freedoms and independence they had not previously had. Before the bicycle women were expected to progress on foot, in carriages or on horseback riding sidesaddle. They were treated as frail, delicate creatures and as such were constantly under the supervision of the men in their life. If you look at the expectations placed upon women at the time – the demeanour and physical presence they were expected to portray, it was anything but realistic. Portraiture and advertisements from the end of the 1800s gives an indication of what women were ‘supposed’ to be. The fashion was to be extremely thin, pale and frail looking. To the modern gaze the women depicted look almost sickly.

Women’s clothes at the time weren’t even permitted to have pockets, the reason dress patterns don’t traditionally allow for them. It was thought they might use them to collect pamphlets or pass notes and articles about womens’ crusade for the vote and read them when alone and away from the supervision of men. Female dress at the time was also inherently restrictive with undergarments alone weighing as much as 20lbs. Items of clothing such as corsets and heavily draped skirts were supposed to accentuate this view of femininity but they made basic movements difficult and cycling next to impossible. Therefore for a woman to engage in cycling they would have to reject this form of dress in lieu of something more practical. This was a threatening concept for conservatives of the time who took women changing their dress and engaging in cycling as a rejection of gender norms and their traditional role in society. Which it was. A widespread and vicious campaign to discourage women from cycling can be seen littered across newspaper and magazine articles from the time.  For example a Washington Sunday Herald article published this condemnation:

“I think the most vicious thing I ever saw in all my life was woman on a bicycle … I had thought that cigarette smoking was the worst thing a woman could do, but I have changed my mind.”

Other contemporary articles give accounts of women being verbally abused when seen on a bike in public. A myriad of different arguments were used to try and dissuade women from using a bicycle. Firstly ludicrous moral objections were made suggesting that women may be sexually awakened by cycling, and that it was a leading cause of lesbianism among the upper classes. Suggestions were made that women would abandon their families, leaving men to feed and care for the children while they entertained themselves on a bike. That dressing in suitable biking clothes made them more masculine and they would “forget how to be a woman”.  Then suspect medical arguments were made against female cyclists. There is voluminous back catalogue of doctors case studies which suggest that cycling causes chronic dysentery, infertility and severe exhaustion when practised by women. These are obviously false medical claims but they feed into the narrative of women as frail beings. In the late 1890s “Bicycle Face” was considered a genuine medical condition. It is outlined in, among other places, the literary digest of 1895. A condition which left women: “usually flushed, but sometimes pale, often with lips more or less drawn, and the beginning of dark shadows under the eyes, and always with an expression of weariness…. Bicycle face is characterised by a hard cliched jaw and bulging eyes.” Another way in which women were dissuaded from cycling was more social than scientific, though equally insulting. Cycling was presented to women as a hurdle to finding a husband. It was argued that taking bike rides alone in the countryside brought women away from urban centres where they were likely to be courted. Also, even if they did meet a man, a female cyclist would be supremely undesirable because of things like ‘bicycle face’ and ‘masculine’ clothing. A woman on a bike was going places and was seen to have a mind of her own. These were suggested as deeply unattractive qualities for a woman in the late 1800s. Overall cycling was marketed as a “gateway activity” for women which would eventually lead them to all sorts of unfeminine pursuits such as politics or business and this was greatly feared by the male establishment.  Ultimately their fears proved justified as the advent of female cycling did lead women towards these practices.

In the 1880s a slew of new patents were received in the British Patent Office by female inventors. They were submitting patents for clothes which could be transformed into garments suitable for cycling. These patents gave new freedoms to not only the women who created them by giving them a new stream of income, but also the women who wore the designs. Women were enabled to be cyclists and maintain their femininity. It gave them a degree of control over the narrative of what it meant to be feminine for the first time. The clothing designs produced and the mechanisms to adapt them for cycling were ingenious.

Take for example Alice Bygraves 1895 patent for a long modest skirt fitted with hitchable pulleys which drew the fabric up at the sides freeing a lady’s legs to pedal.  A similar design by Julia Gill 1895, uses a series of hoops to pull a skirt up like a Venetian blind to achieve the same effect. Another fantastic creation is that of the Pease sisters in 1896 where a long skirt is designed to be hoisted up and over the shoulders and worn as a cape when on a bike. Because all these designs revealed the leg it resulted in the advent of bloomers as undergarments. They protected a lady’s modesty by covering the legs but gave the same freedom of movement as trousers. Though for all intents and purposes these garments do preserve a woman’s decency they still faced backlash for allowing an undergarment to be on public display, even one as unsuggestive as bloomers. Also their resemblance to trousers was pounced upon as being damaging to femininity by conservative commentators. Cartoons and ads from the time clearly illustrate this point.

Because of their popularity and their portrayal in the media bicycles became synonymous with the ‘New Woman’. These were the female activists who were vocally challenging the stars quo of woman. They wanted a political voice through the vote, they didn’t want to deprived of a career or pigeon holed as wives and mothers only. The wanted access to education and demanded it. In fact when Cambridge University allowed the admission of female students many male undergrads protested. They hung an effigy of a woman on a bicycle which was subsequently abused. The suffragettes in London rode around the city on bicycles draped in “Votes for Women” banners, and created a blockade out of bikes to obstruct Winston Churchill. Ultimately the bicycle became a symbol of women’s emancipation and their freedom rolling forward. This is most clearly articulated by the famed women’s rights activist Susan B. Anthony who said;

“Let me tell you what I think of bicycling. I think it has done more to emancipate women than anything else in the world. It gives women a feeling of freedom and self-reliance. I stand and rejoice every time I see a woman ride by on a wheel…the picture of free, untrammeled womanhood.”