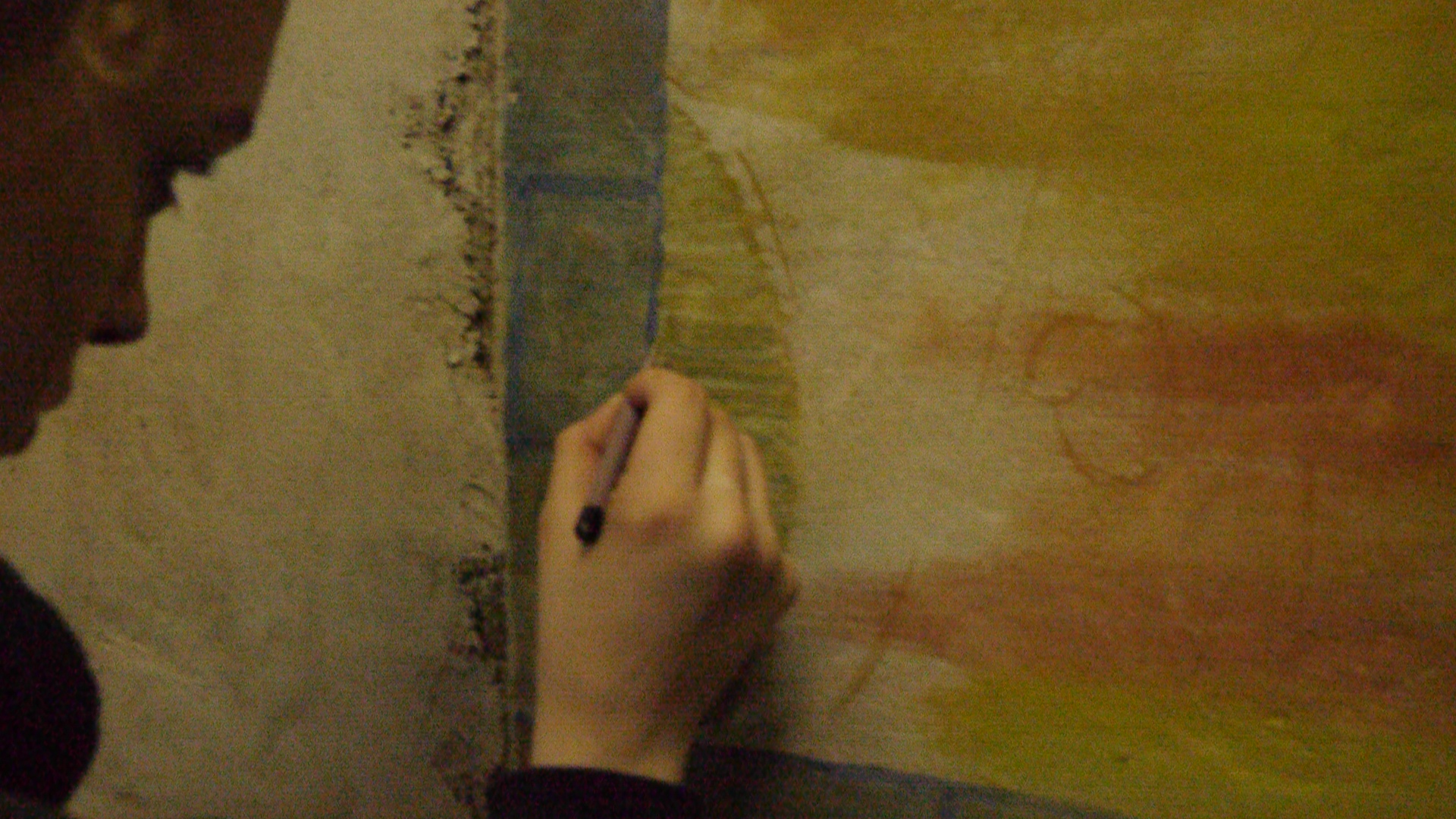 In the midst of the most febrile activity imaginable as typical of a Renaissance Florentine art workshop, diffuse and heaving energies ordered themselves into direction through collective concentration on the realisation, by means of adept processes and techniques, of the conception of the Heritage House fresco, under the tutelage of their master. After the installation of the panel, the artists began to mix the lime and water to form the plaster which is the painting medium. The inclusion of soil from Abbeyleix Bog lent the entire process authenticity: sense of place is not only the subject matter of the piece but the means by which it is represented.

The painters began working inwards from the lateral extremities of the surface toward the centre, the ‘liminal space’. Thus the stages of painting form the narrative of the fresco to the extent that the depicted locale shapes the perception which in turn becomes active in the reshaping of the sense of place. This acts, through its figuration, as a microcosm of inspiration for the artwork which then redefines its subject through the organisation of its scenes and the tenor of its motifs.

The central liminal space is in broad concord with the traditional conceptions of fresco painting. Even before the Renaissance, in Pompeii or, much further back in Syria, the prime motive of the genre has been its devotional nature. This is mirrored in the Abbeyleix Heritage House fresco by the ceramic ecclesiastical arch in the centre which equally respects the monastic and medieval history of the town, and brings an architectonic tactility. The central space is topographical in terms of its transition from bog to town and perceptual in its status as a place of reflection on the panels to its left while being anticipatory of the panels to the right – the consciousness portrayed as both a reactive faculty and formative force.

Recurrent throughout are floral, plant and insect motifs which are both ornamental and embedded in the thrust of the artistic conception. These motifs have a repoussoir effect, a ‘pushing back’, on the recession into space which, in this case, signifies a temporal as well as spatial theme of organicism and the gradual natural evolution from nature to culture. The organic foreground of each panel, while lending compositional cohesion, is also a reminder of the eternal self-renewal of nature. In this connection, the final panel of the Abbeyleix townscape is neatly synoptic of the entire piece, the town being a natural social effluxion of a timeless landscape. The sense of unobtrusive organicism implied in the fresco chimes well with the unremitting respect which the town holds for its environs and its history.

In all, this was a huge effort, given the brevity of time available, the quantity of work and the meticulousness with which it had to be carried out.