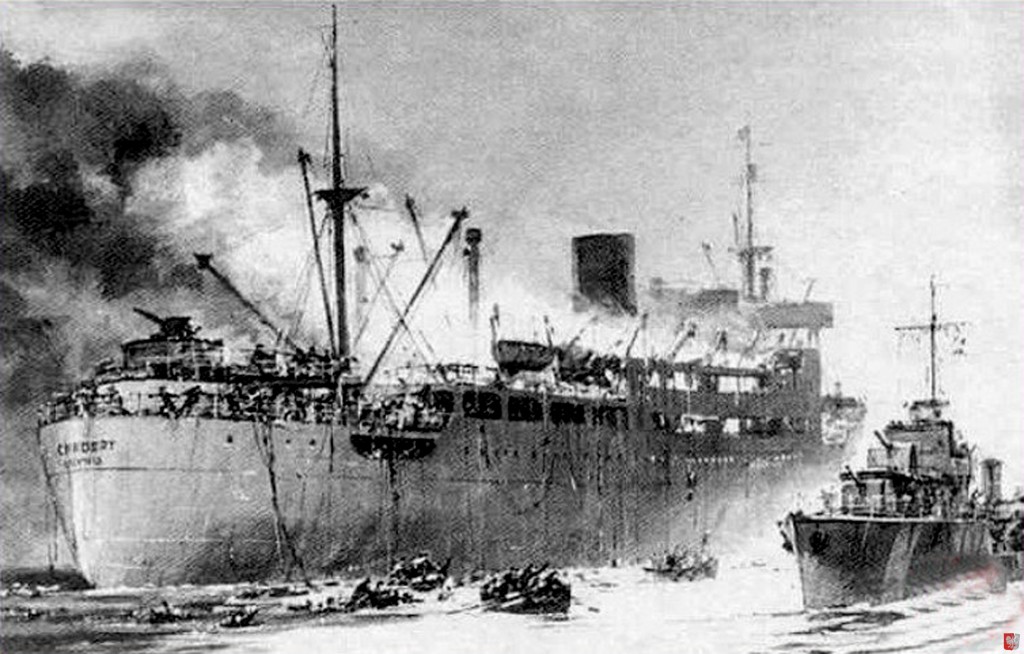 John Eustace Vesey the 6th Viscount de Vesci of Abbeyleix was born in 1919, the only son of three children from the marriage of Colonel Hon. Thomas Eustace Vesey and Lady Cecily Kathleen Browne. He inherited the title of Viscount on the death of his uncle Ivo Richard de Vesci in August 1958.

J.E Vesey came from a long line of military men within the family. His father had attained the rank of Colonel in the Irish Guards being wounded twice and receiving the Croix de Guerre during World War One. Like many of his contemporaries within the landed gentry social order, John Eustace  was commissioned a 2nd Lieutenant before the outbreak of the Second World War. He was assigned to the 1st Battalion, 2nd Company of the Irish Guards of which his father was a Lieutenant Colonel. His regimental No. was 91474.

With the outbreak of World War Two, combat operations became an ever real possibility for the men of the Irish Guards. Their first assignment was in April 1940 when the War Diaries record the embarkation of the 1st Battalion to Norway. At the time, Hitler had ordered the invasion of Norway to secure Germany’s northern flank and to use its ports as a base for launching u-boat attacks on the United Kingdom. To both countries Norway was a strategic asset worth fighting over.

On the 14th of May 1940 a Polish registered ship M.S. Chrobry was struck by two German dive bombers off the icy coast of Narvik, Norway,

as an intense land battle was being fought around the important iron ore trading port. Aboard the ship were some 1,100 British soldiers including many from the 1st Battalion of the Irish Guards. 2nd Lieutenant J.E Vesey was billeted at the ship’s stern when a bomb from a JU-87 Stuka dive bomber exploded in the ships funnel killing many of the officers who had their billets close to the warmer engine room on the ship. Badly stricken and with the loss of many of the officers on board, panic ensued until J.E Vesey and a number of able-bodied officers restored order and organized the ship’s evacuation. HMS Wolverine an escort ship in the area rescued over 700 soldiers from the Chrobry before she sank with the loss of almost 400 men and equipment. Luckily for the future Viscount he had survived his first encounter with death in the War, although the attack had cost the 1st Battalion heavily. As a consequence of the explosion J.E Vesey was almost completely  deaf in one ear for the rest of his life.

He returned to England after the evacuation Norway and its surrender in June 1940. Here the war diaries mention that he was promoted to Lieutenant and by September 1941 he was attached to a machine gun platoon within the 2nd Company, as Britain prepared for the threat of invasion from Germany after the fall of France. This wasn’t to come and by 1943 with the help of the United States, Britain was in a position to go on the offensive against the Germans once again.

The 1st Battalion was attached to the 1st Infantry Division which was sent to North Africa in March 1943 to fight the Germans then under the command of the legendary Erwin Rommel. Despite heavy losses in Tunisia the 2nd company was reorganized and plans were made for the invasion of the Italian mainland. Lieutenant Vesey was to take part in the operation near Anzio near the south of Rome in January 1944. An amphibious landing a precursor to D-Day was planned but poorly executed. Despite virtually no German resistance in the opening days of the battle, a large German forced supplied from Southern Italy regrouped and launched a vicious counter attack on the beachhead in early February. On the 4th of Feb. the war diaries record the loss of 319 men from the 1st Battalion many of whom were captured. It seems that John Vesey was amongst the prisoners captured on that day. His fighting days in the war had ended.

At Heritage House we recently came across a copy of Mein Kampf translated into English. It was signed by John Vesey and dated 6th June 1944, Moosburg. Moosburg was the one of the largest POW camps in Germany located in Bavaria, in the south. This was also a transit camp for allied prisoners from the North Africa and Italian theatres. J.E Vesey received an English translation of Mein Kampf here as Nazi policy dictated that POW’s were to be indoctrinated with the Fuhrer’s ideology. With a short stay at Moosburg, Lieutenant Vesey was transported further north to Offizierlager 79 in Brunswick Lower Saxony. During his stay here he would have witnessed the carpet bombing raids on German cities by the Allies in the latter period of the war, including Dresden, Hanover and Braunschweig. Oflag 79 itself was attacked by allied aircraft in which 10 prisoners were killed. Conditions in the camp would have been bleak towards the closing stages of the war as the entire country’s infrastructure had been decimated, with food supplies minimal and a population on the brink of starvation. Camps such as Oflag 79 would have been reduced to almost subsistence levels. The camp was eventually liberated on the 12th of April 1945 by the U.S 9TH Army. John Vesey’s war had ended and within less than a month Nazi Germany had surrendered.

Luckily for us here at Heritage House, John Vesey decided to keep his copy of Mein Kampf, perhaps as a token reminder of his experiences in the war. He escaped death on a number of occasions and was involved in a number of battle theatres during the war. Being promoted after his narrow escape on the M.S Chrobry, surviving the onslaught in the deserts of North Africa against the legendary Rommel to dodging death on the beaches of Anzio Italy and surviving Allied carpet-bombing as a POW in Germany, it’s unlikely with such a busy war for the subsequent Viscount that he actually got time to read his copy of Mein Kampf…